"Of a singularly quiet disposition, he achieved what he wanted from those above or below him by sheer quiet charm and determined constancy of purpose.

He was a remarkably steady experimenter and observer in flight, a quality rather rare in those of such active imagination.

His inventions contributed greatly to the success of the ship. He could define the requirements exactly and grasped the mechanical principles of design so clearly that almost all his designs, even those of startling novelty, were right the first time or required only correction in detail.

Beyond his refusal to claim credit for what he had done, one found it difficult to get him to admit credit.

His one test for a thing—technically or morally—was whether it was right.

Of all the good airship men who have been lost, he leaves a gap which will be most difficult to fill." 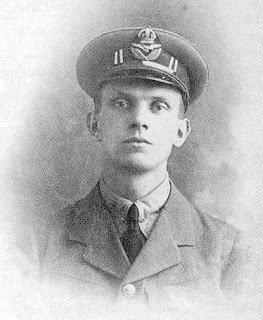 Squadron Leader Frederick Michael Rope was born in 1888 and educated at Shrewsbury School and Birmingham University. Until 1912 he was an engineer to the British Electric Plant Company, Alloa. In 1913 he was employed on locomotive engineering on the Brighton Railway.

In 1915 he joined the Royal Naval Air Service. He served at the Capel and Kingsnorth Air Stations and later as staff officer in the Department of the Director of Research, where he became Lead Designer on the SS Zero airship project.

After the war, he transferred into the newly formed RAF and spent much of his early service in the Far East. It was while stationed at Martlesham Heath in Suffolk, however, that he met and fell in love with local girl Doreen Jolly from Grange Farm in Kesgrave.

He continued to work on airship design and construction, eventually joining the team responsible for producing the revolutionary new R101 at the Royal Airship Works based at Cardington. His contribution to the project was significant. Among his innovative developments were a "parachute" wiring system for securing the gas bags which gave the airship its lift, a new autogas valve and a variable-pitch, wind-driven propeller to power the onboard electric generator.

At the height of construction, Michael Rope married Doreen Jolly.

Lieutenant-Colonel Richmond commented that it was "almost bigamy" because he was "married to the R101 already."

In the fatal crash of the R101 forty-six people, including  Michael Rope perished in the wreck.

In the months following the disaster, permission was given by Bishop Cary-Elwes for a chapel to be built in Kesgrave, on land donated by William Jolly, as a memorial to Michael Rope.

Work began in June 1931, with a private ceremony during which the foundation stone was laid on behalf of Michael Rope's eight month old son Crispin.

A Charitable Trust Fund was established by the family and is administered to this day by Crispin Rope.

In January 2019, he and his fellow Trustees agreed to pledge a grant of £10,000 to fund the building of the replica Zero control car.

Project Zero is thankful for the opportunity to continue his legacy with our replica and could not have wished for a more poignant and appropriate supporter for our project.

Build updates will be posted from the Spring of 2019.